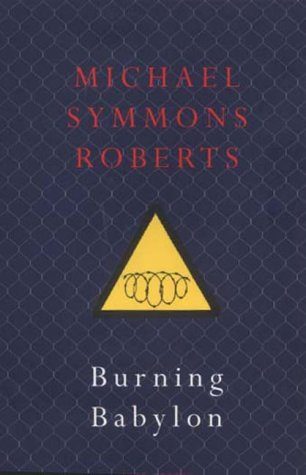 In his first two collections – Soft Keys and Raising Sparks – Michael Symmons Roberts established himself as a lyric and dramatic poet with metaphysical concerns. In this new collection, those concerns are as strong as ever, but rooted in a specific place and time.

These poems describe the personal and public rise and fall of Greenham Common. The public story, as one of the most contentious missile bases of the cold war, ended with fences removed, buildings demolished, the base returned to common land. The private history emerges from the poet’s own experience, as an adolescent living a mile away from Greenham Common at the height of its powers. That third community of locals – not the USAF or the peace camps – is finally given a voice in Burning Babylon.

This is war poetry, but from an undeclared war in which battle lines were unclear, secrecy was an obsession, and threat was the chief weapon. At the heart of it all was that real and mythic gated city – the base – which was both a key part of the poet’s childhood landscape, and the prime nuclear target in Britain. This image of a huge, occult and lethal power latent behind wire in the middle of England has haunted the minds of a generation – just as the poems in this book will resonate long after it is laid aside.

THE QUALITIES OF FALLOUT

Would it be conspicuous as snowflakes,
only white-hot? Or subtle as

that valley rain, which drenches
without ever being other than the air?

Is it like cyanide – odourless
to half the world, burnt almonds to the rest?

Winter solstice. Deep advent.
Darkness is thicker than ever;

people are led through dry streets
by their dogs and their troubles,

and there is a new subtext to the sky,
something of cobweb, salt and star.