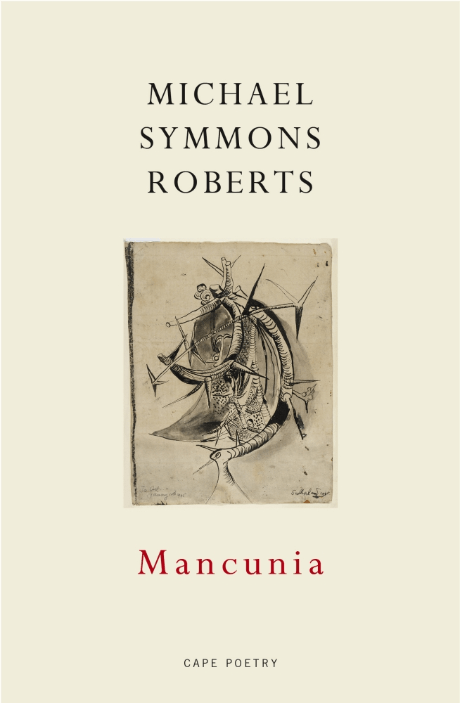 Mancunia is both a real and an unreal city. In part, it is rooted in Manchester, but it is an imagined city too, a fallen utopia viewed from formal tracks, as from the train in the background of De Chirico’s paintings. In these poems we encounter a Victorian diorama, a bar where a merchant mariner has a story he must tell, a chimeric creature – Miss Molasses – emerging from the old docks. There are poems in honour of Mancunia’s bureaucrats: the Master of the Lighting of Small Objects, the Superintendent of Public Spectacles, the Co-ordinator of Misreadings. Metaphysical and lyrical, the poems in Michael Symmons Roberts’ seventh collection are concerned with why and how we ascribe value, where it resides and how it survives. Mancunia is – like More’s Utopia – both a no-place and an attempt at the good-place. It is occupied, liberated, abandoned and rebuilt. Capacious, disturbing and shape-shifting, these are poems for our changing times.

In a collection that constantly defies expectation, the British poet offers a strikingly imaginative portrait of the Manchester in which he lives.

There are many ways of occupying a city and Michael Symmons Roberts, in his superb, substantial and intricately varied seventh volume, reminds us it is a complicated business: we live in cities imaginatively as well as actually. Sometimes, we are painfully adjacent, shallow-rooted, trying to take hold.

This book offers only a notional portrait of the Manchester in which Symmons Roberts lives. It has become Mancunia, the city as it exists in his mind. This is his first collection since the masterly Drysalter, which won the Forward prize and Costa poetry award, and was, you might have reasonably supposed, an impossible act to follow.

Yet with each reading of this volume, one sees more – as one’s eyes adjust to the dark. For in many of these poems light is wanting (in both senses of the phrase). Mancunian Miserere is a good example of a poem about going against the city’s grain and his own. He wishes to atone for a “constancy of inattention”, while the poem offers evidence of the contrary on a tormented walk down Cross Street (the city a version of his own body). I love the peculiar detail about the “undersides of leaves” prefiguring a storm, and the implication that if he knew to notice this, it would somehow help him. Symmons Roberts’s writing runs as unhindered as the rain he describes. Yet he registers the way in which he feels blocked: “prise my teeth apart O God that I might learn to praise”.

Praise is so easy it can become difficult. Affirmation is never straightforward. Love Song on a Loop explores the idea that the expression of love is a devalued currency: “And so this song undoes itself,/unwinding into gibberish./Nonetheless, it started/true enough, I feel it, so help me.”

The stumbling block is that emphasising the positive can seem inauthentic or impersonal. Master of Lighting Small Details (honouring a Mancunian bureaucrat) is a poem that could be taken as a riposte to Robert Frost’s The Road Not Taken – the road not taken resembling the love unspoken.

We begin in a dark bar, with a raised glass to “the way things are/and might have been, if I had just…” And then an image strikes:

Yet all those miles away some clutch

of thistles catches midday sun with such

rare glory that a traveller through

that field may stop to take it in as though

the glimpse of it was meant for him, and walk my path as it were his own.

It is a charmed moment, but hastily shelved – the light put out.

One of the wonderful things about Symmons Roberts is his way of pushing poems – and himself with them – in a direction you were not expecting. He constantly reconstitutes the world.

In the marvellous Tightrope Song, Symmons Roberts tells of a dazzling gymnast from the rope’s point of view. Similarly, a poem about a wall encourages us to consider the entire wall and not merely our half of it. In a brilliant, unnerving poem entitled The Future of Books, Symmons Roberts envisions literature reprocessed: “Our slice has its own distinctive shade and scent/ – paper-musk, the dark behind bookshelves – /but it so mystifies our future selves/they fry it like black pudding, a salt and bitter/jus of atlas, sonnet, gossip, scripture.”

Symmons Roberts scoops up that remaindered dark in handfuls.

And possibly the best poem in the collection is In Paradisum, about Manchester’s refugee children. Here, Symmons Roberts reminds us of how easy it is to see human extremity without seeing it – a moving feat in what is a first-rate collection.

Review from THE OBSERVER

Mancunia at night looks like embers from above,
but hold the dive and it reassembles, cools,
coalesces into districts, flyovers, a motherboard,

now stadiums like unblinking eyes,
car lots set out as piano keys, parks with lake wounds,
counter-flow of arteries in red and white,

the bass clef curves of cul de sacs
in outlying estates, then factories with starting guns
of smoke that sting and make you squint,

now you can pick out individual cars, nags’ heads
down in dark fields, glow of dressed shop windows,
drunks on their tightrope walk home,

black poplars’ ragged tops, roof tiles, kerbstones,
air that drops from ice to cloud to everything a city
cooks at once until the road meets you

face‑to‑face, down and under, slower, denser
and the clay arrests you, holds you as a pulse for good,
so what keeps this city alive is you.