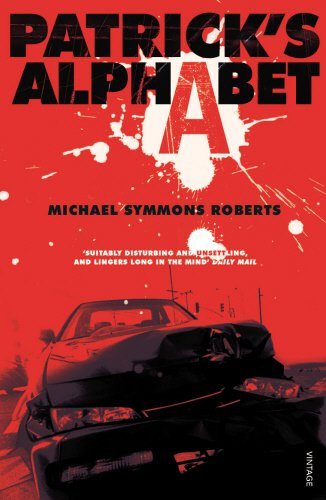 When a teenage couple are found murdered in their car, a boy called Adam Sligo is the only suspect. The letter A is found blazoned on the wall at the murder scene and is soon followed, around town, by the other letters of the alphabet, each immaculately painted in red. What do the letters mean? Is Sligo playing games with the police? Or putting a spell on the town?

Perry Scholes is mixed up in all this from the start: a man haunted by cars and death – and photographic images of both. He trawls the motorways and edgelands listening to police radio, getting to the car-crash or the crime scene before them. He makes a living selling these shots to the papers. He is the one who spots the painted letters, and begins to document their appearances.

As the town is paralysed by fear and paranoia, a vigilante cult emerges, arming itself for the battle against evil. Perry finds himself trapped in a nightmare. A killer is at large, and the alphabetical messages he leaves seem to be personal messages for him.

“What makes this book different is its use of language. The narrative voice turns from a dark whodunit into something more intriguing. But Roberts never forgets that his principal responsibility is to keep us hooked – and that he does with aplomb”

“Reminded me at different times of Camus’s The Plague, Kafka’s The Castle… A disturbing and intense piece of fiction”

A was written in blood where the bodies were found. It was paint, but the story went round town that it was blood. More than that, the story said Michelle had dipped a finger in her gaping chest, to write a message on the concrete car park wall. She had finished the first letter, then collapsed.

The first letter of what? Her friends said it must have been the name of the killer. She was writing ADAM SLIGO, but her life ran out at A. Her sister Ally clung to the idea that it was ALLY I LOVE YOU, or ALLY DON’T WORRY. There was even a stupid theory that it wasn’t A at all, that she was desperate and unable to shout, that she struggled to the wall and tried to write HELP in her own blood. It was really H, but she was so weak that the uprights fell into an A.

A few people knew that it was paint, and knew it had nothing to do with Michelle. The police who were second on the scene were certain she had never left the car. The shots were fired at close range through the windscreen of Jake’s old blue BMW. Jake and Michelle both died in their seats. All the blood, and both victims, stayed inside the car.

I had evidence that Michelle didn’t write the A. I got there first as always. I had to get my work done before it was all cleared up. When I arrived, they were both dead, and in the background of my shots the wall is clean.

Proof counts for nothing unless it’s your own proof. I’ve thought a lot about this. I could have had one of my pictures blown up to billboard size and stuck it on the town hall. The red paint could have been sent for analysis, and the results bellowed through a megaphone by a man in a white coat. It wouldn’t change a thing for those who thought Michelle had left a final, cryptic message.

Far from fading, as the weeks passed, the story grew. A lot of people in this town needed some last word from her. So I kept quiet about what I knew.

And what I knew at the start of that summer was this: after the murder, someone took a can of red paint and daubed a letter A at the crime scene. From the look of it, they used a brush and took some time. It was not a message. End of story.