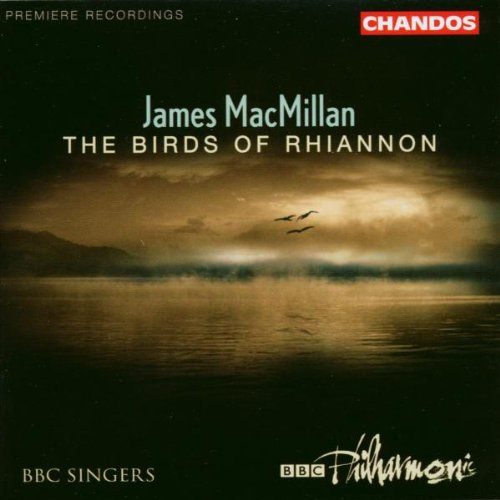 The Birds of Rhiannon

This is a through-composed work comprising four sections and lasting about twenty five minutes. The final section is a coda involving a choir and the text is a poem with the same title by Michael Symmons Roberts.

The piece is essentially abstract, but was inspired by a myth from the Mabinogian (a collection of ancient Welsh stories). The Birds of Rhiannon are mystical, angelic presences which appear and sing on the death of Bran – a Fisher King-type figure who sacrifices his life (he is beheaded) for the sake of peace between two warring peoples. In essence the work could be described as being a dramatic concerto for orchestra with a mystical coda for choir.

Reviews of The Birds of Rhiannon

“…boldly coloured music, dramatic confrontations of ideas, a powerful surge of momentum, and instrumental lines that have an independent life but gel as a cohesive texture… MacMillan shares with Rimsky a virtuosity in defining and combining instrumental timbres.”

“MacMillan swiftly segues into the Roberts poem, set with a particularly forthright mythic confidence. The poem itself is brazenly assured: “East means nothing now,/ nor West, no happenstance / of rock can bear the name of Britain”, and as a finale it is unarguably beautiful, a modern hymn that rises sumptuously aloft.”